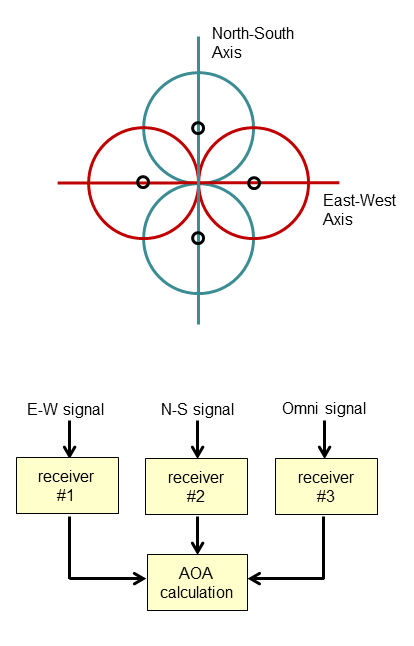 Direction finding applications are easy to implement on a PVP-7 card manufactured by Star Communications, Inc.  With multiple receivers, you can connect multiple antenna feeds to one card.  Sampled data is synchronized across all receivers, allowing the signals to be processed coherently.  These features are ideal for direction finding applications.

There are many approaches to direction finding, including systems based on RSSI, Doppler, and TDOA.  The figures to the right illustrate one well-known method, called the Watson-Watt amplitude comparison system, using an Adcock antenna.  The upper figure is a top view of an Adcock antenna, with four equally-spaced vertical elements arranged in pairs along the North-South axis and the East-West axis.  This produces two figure-eight patterns, with maximum sensitivity along the axis, and nulls perpendicular to the axis.  In the lower figure, the N-S and E-W signals are combined with an omnidirectional sense antenna, to calculate the angle of arrival (AOA).  The sense antenna is used to resolve a 180o directional ambiguity.

This application can be implemented using a single PVP-731 card.  A PVP-731 card contains three receivers and one FPGA.  Each antenna feed is connected to its own receiver, and the three signals are then routed to the FPGA on the card.  Because the sample streams from each receiver are synchronized, the three signals can be processed coherently to obtain AOA.  The result?  The hardware required to support your DF application has been minimized, saving you size, weight, power, and money.